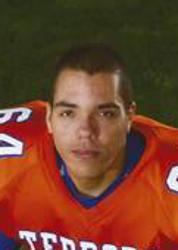 Each week during the 2014-15 year beginning in late October, the Fox Valley Association will feature two student-athletes (one male and one female) from one of its 10 schools for a "Student-Athlete Spotlight" Q & A segment. The segments will be posted every Tuesday and Thursday and individuals are selected by the school.

Favorite aspect of your school: One of my favorite things about Appleton West is the school spirit and sense of pride that is felt in our building. There are many different groups of students, but it is cool to see them collectively rally around a team, or sport like they do during homecoming week.

Favorite aspect about being involved in school activities: I enjoy that I get to meet people that I normally wouldn’t have met. It allows me to interact and get to know many more people, as well as meeting students from other schools.

If you have been involved in community service projects, which has been the most rewarding and why? During the end of my Junior year I was asked to spend time with a student from Wilson Middle School. This student was going through some hard times that I could relate to. I saw him once a week and tried to help him in any way that I could. As I spent time with him I had some great conversations with him, even though he was many years younger than me. I am privileged to know him, and things are looking up for him.

What is your desired major/career field: I am going to study engineering at the institute that I attend.

What is your favorite class: Calculus BC

Who is your favorite teacher: Mme. Leopold

What is the best advice one of your coaches has given you: When times get hard you have to grind and work through them. The ability to never give in despite facing adversity shows the quality of your character.

Something that you would be surprised to know about me is…: I am a second degree black belt.

Favorite place to play on the road in the FVA: Kaukauna

Favorite athlete to compete against in the FVA: Zach Abitz (Appleton North)

Favorite memory from being involved in co-curricular activities is…: Playing the first ever jv, varsity, and regular season varsity games at our school’s field.

A non-athletic talent I have is…: Playing the tuba