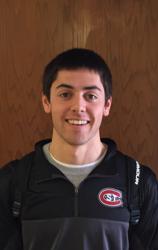 Each week during the 2014-15 year beginning in late October, the Fox Valley Association will feature two student-athletes (one male and one female) from one of its 10 schools for a "Student-Athlete Spotlight" Q & A segment. The segments will be posted every Tuesday and Thursday and individuals are selected by the school.

Favorite aspect of your school: My favorite aspect of Appleton East is that all of the teachers genuinely get to know the students, and teachers who I have never had for class stop me and say hi in the hallways.

If you have been involved in community service projects, which has been most rewarding and why? Last summer I participated in a Habitat For Humanity build in Kaukauna where a few of my friends and I spent time working on a house project that was for a low income family. It felt amazing to know that we were building a place for a family that was going to call it their home.

College or post-high school plans: I plan on attending a university and hope to play baseball in college as well.

What is your desired major/career field? I plan on pursing a career in engineering.

What is your favorite class? Math

Who is your favorite teacher? Mrs. Radue

What is the best advice one of your coaches has given you? It is hard to narrow it down to one specific saying, but it is safe to say coach Schwanke's message as a whole impacts a lot of his players. He and his staff certainly make it a priority to develop us into men as well as athletes.

Something people would be surprised to know about me is…: I have competed in fishing tournaments.

Favorite place to play on the road in the FVA? Oshkosh North

Favorite athlete to compete against in the FVA: Ben Carew, Kimberly

Favorite memory from being involved in co-curricular activities is…: Pitching at the Fox Cities Stadium last season

A non-athletic talent I have is…: fishing