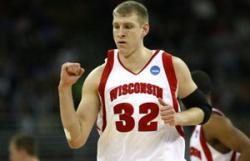 Brian Butch played basketball and graduated from Appleton West High School in 2003. He was a McDonald's All-American while leading the Terrors to a state runner-up finish as a senior. He later played at the University of Wisconsin and played professionally in various leagues. Here is an update of his accomplishments and where he is now:

List any community organizations, hobbies or activities you are involved in: I run Brian Butch Basketball Camps

What sports do you participate in now? Basketball

What game/event against an FVA opponent stands out in your memory and why? They were all great environments, I loved that so many people came out to all of our games.

Who was your favorite athlete you competed against in the FVA? Steve Hoelzel, Kaukauna

Who was your favorite FVA team to compete against? Kaukauna

What makes you most proud of your high school? The group of teammates I played with

Please share any other great memories of competing in the FVA: Going to the state tournament the last two years