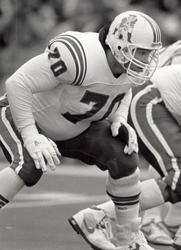 Dave Viaene was a state wrestling champion at Kaukauna High School upon graduation in 1983 and went on to play three seasons in the National Football League. He played football collegiately and was a two-time All-American wrestler at the University of Minnesota-Duluth. Professionally, he appeared in 20 career games with the New England Patriots. Here is a look back at his career and what he is doing now.

What sports do you participate in now? Hunting and Fishing

What game/event against an FVA opponent stands out in your memory and why? Football and wrestling against Kimberly.  We were two of the most competitive teams.

Who was your favorite athlete you competed against in the FVA? Dave Rooyakkers

Who was your favorite FVA team to compete against? Kimberly

What makes you most proud of your high school? The community support, the outstanding facilities, the great faculty and administration, and the outstanding athletic director

Please share any other great memories of competing in the FVA: So many great memories, too many to list.  Was first state wrestling champion in Kaukauna's history in 1983.

Please share anything else you have done or accomplished since high school that is noteworthy: Earned The Community Partnership Award from City of Appleton.  Viaene Property Management continually provides more affordable housing units under federal guidelines than any other individual business in the Fox Valley.