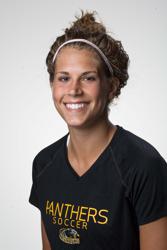 Sarah Hagen was a three-time all-state soccer player at Appleton North and played six seasons of professional soccer after a stellar collegiate career at UW-Milwaukee. Hagen ranks ninth in NCAA Division I history with 93 career goals and was a three-time Horizon League Player of the Year. She also appeared in two matches for the U.S. National Team in 2014. Here is an update of her accomplishments and where she is now:

List any community organizations, hobbies or activities you are involved in: Through my current job at Fizz (Word of Mouth Marketing) I've been assigned to speak to youth athletes about nutrition and how it correlates to performance.

What sports do you participate in now? I currently speak to all sports offered at local high schools.

What game/event against an FVA opponent stands out in your memory and why? There was a game in my sophomore year against Kimberly that I had 3 goals in just over a minute.

Who was your favorite athlete you competed against in the FVA? Stephanie Parkins from Appleton East was always a tough defender to go up against. We had some good battles.

Who was your favorite FVA team to compete against? Appleton East or Appleton West because of the in-city rivalry.

What makes you most proud of your high school? The coaches and teachers that made up the school were truly there to make you better. They wanted you to succeed.